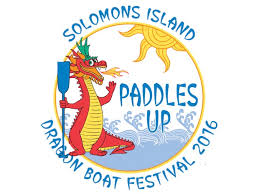 The tradition of the Dragon Boat Festival has become a new symbol for community celebration and competition, now with its latest stop coming to Solomons Island.

Dragon Boat Racing is one of the fastest growing team water sports in the world, inviting skilled competition and pageantry into a tradition that has its origins in an Ancient Chinese festival. On August 26th and 27th, the festivity will come to Solomons. Southern Maryland Community Resources will be hosting its first outing of a planned annual dragon boat racing tradition aimed at fundraising for those with developmental differences.

“The myth is that you paint the dragons head and dot the eye, so the dragon can race well for you,” said Bonnie Elward, the chairwoman of the event. The pre-race event known as ‘the dotting of the eye’ is a blessing of the fleet ceremony associated with the Dragon Boat festival. The ‘dotting of the eye’ will be held on the evening of August 26th, before races begin the following day.

With teams consisting of 16 paddlers, 2 alternates, and a drummer to lead the rowing cadence, the sport is as much a matter of coordination between rowers as it is of individual skill. But the sport also comes with a healthy dose of tradition. The idea behind the Dragon Boat Festival was to create a fun spectacle event in order to invite as many people as possible to come out. As emphasized on the event website, there is “no experience necessary” for paddlers hoping to compete.

While the event is hosted largely with the support of Our Lady Star of the Sea Catholic Church, the committee in charge of planning the event comes from a diverse background: with other churches and denominations, business leaders and members of the Southern Maryland Community Resources group. The emphasis since the first planning meetings began, last October, has been to bring a variety of organizations and communities together to recognize the needs of the developmentally challenged community. The aim of the event is to bridge a resource gap for those with developmental differences by fundraising for educational opportunities after high school.

“The government takes care of the kids in terms of schooling until they are 21. After 21 they don’t do anything anymore,” said Father Mike Wilson, of our Lady Star of the Sea Catholic Church. Wilson has a seat on the committee for planning the event and organizing outreach.

Southern Maryland Community Resources is an organization aimed at catering to special needs by stepping in where high schools leave off. When they reach the age of 21, those with special needs are made to move on from public education, often times leaving them with few opportunities.

For the racing event awards will surely be given for the winning teams of the second day’s racing events, but there will also be plenty of pageantry in costuming and boat decoration. Awards for best drummer’s costume and best team tent will also be given.

There will be an appearance made by the Pope’s Fiat on Friday afternoon. The event will also have martial arts demonstrations and dance. VIP parking will be with the Lady Star of the Sea Church. A Vendor Village will be active for the duration of the festivities. A Wellness area will also be provided with respite tents for those needing shade from the heat. With 22 teams registered, the races on Saturday will run from 9 a.m. to 3 p.m. The dragon boats will be provided by Canadian racing company 22 Dragons. All are welcome to come out and see the event.